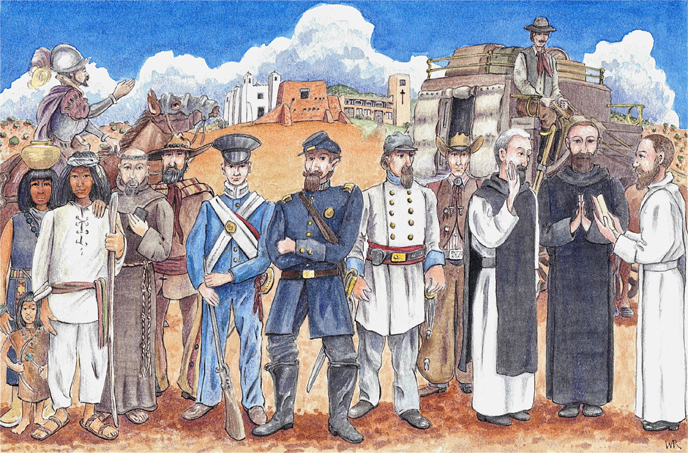 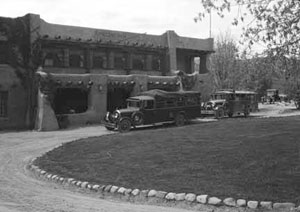 Tour buses pull up to the Valley Ranch dude ranch, a popular destination along Route 66.
What is now the Village of Pecos and the Pecos River Canyon and surrounding area have been settled since at least the 8th century. Impressive ruins, archeology and history are preserved at the Pecos National Historic Park several miles from the Abbey. Centuries before the arrival of the Spanish, native nomads and traders built a multi-storey pueblo on what is now Glorieta Creek. In the 1400s Pecos Pueblo was a regional power and center of trade for the people of the plains and area travelers. The expedition of Francisco Vasquez de Coronado arrived in the Pecos area in September of 1540 and traveled as far north as Terrero. On September 25, 1689 don Domingo Fironza de Cruzate, Governor and Captain General of New Spain, declared this land to be Royal and public domain in the name of His Majesty Charles II, King of Spain. The Cañon de Pecos was granted to Juan de Dios Peña by His Majesty Ferdinand VII, King of Spain, on March 28, 1815. On September 25, 1821 the area became independent of Spain and part of Mexico. 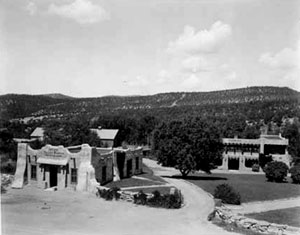 This 1930s photo shows what is now the Abbey Gift Shop.
The United States declared war against Mexico on May 13th, 1846. On August 19th, 1846 New Mexico was claimed as United States territory by General Stephen Watts Kearney. The property on which the Abbey now stands was purchased by Alejandro Valle on May 31, 1852. Between March 26 and 28, 1862 the Civil War Battle of Glorieta Pass was fought nearby; the decisive battle that thwarted Confederate efforts to break the Union hold west of the Rocky Mountains. The property was sold at auction to the Valley Ranching Company on April 10, 1886. The State of New Mexico joined the Union in 1912. From 1882 to 1939 the Terrero Mine in the Pecos Canyon employed about 600 people. Ore was conveyed from the mine site north of Terrero (Spanish for mine dump) to the milling site (el Molino) just over the Abbey’s west ridge by suspended cable. Many of the roads, bridges and camp grounds in the canyon were created by the Civilian Conservation Corps in the 1930s. What is now the Abbey Gift Shop served as a stage coach stop along the Santa Fe Trail and as the Post Office for the mine. Our carpenter shop was the stable. During the heyday of dude ranches along Route 66, both the Valley Ranch and the Forked Lightning Ranch, which was owned by the actress Greer Garson and her husband Buddy Fogelson, were popular destinations. In 1947 Trappist monks from Our Lady of the Valley Abbey in Rhode Island bought the Valley Ranch and formally established the first monastery here in 1948. The Trappists moved to Oregon establishing another Our Lady of Guadalupe Abbey there in 1955, selling the monastery property to Benedictine monks from St. Benedict’s Abbey in Wisconsin who operated the monastery until 1985, when it became part of the Olivetan Congregation. From 1969 to 1985 the monastery served as a center of the Catholic Charismatic Renewal. Our Lady of Guadalupe Abbey now enters the 71st year of continuous monastic presence in Pecos. We look forward to serving the needs of our neighbors and guests for many years to come.